Define Budget for the projects

You can define Project Budget in work hours in the Project card.

Go to Pipeline and navigate into project info, and define an Approved budget, all the rest (Burned, Remaining work, Total expected work, Remaining budget) will be calculated automatically according to the uploaded data from the external system. 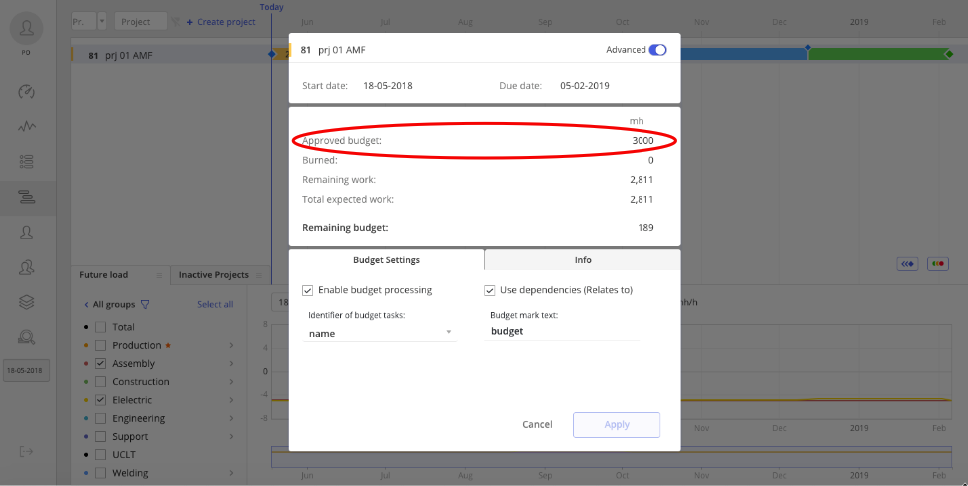 Define Budget for a set of tasks in MSP

1.1. To use budgets in your project you must “enable budget processing”->
Open in the pipeline the project info card (see the previous point) and turn on “Enable budget processing” in Advance settings mode.
The default settings to search for budget tasks in the MS-Project file are the “name” column where Epicflow looks for task containing the phrase “budget” (not case sensitive) in its task name. All other text is not mandatory.

1.3 The Remaining and actual work values of a budget task in MS-Project are calculated by Epicflow and updates when syncing the project.
For a buffer task in MS-project:
– The “Remaining work” denote the remaining buffer left. (10 mh in our example)

– The “Actual Work” is used to denote how much of the work hours is used from this buffer. (90 mh in our example)

Define Budget for a set of tasks in Jira

1.1. To use budgets in your Jira project you must “enable budget processing”:
Open in the pipeline the project info card and turn on “Enable budget processing” in Advance settings mode.
The default Epicflow column for of budget task for Jira is “tag”. The “tag” column in Epicflow corresponds with the “label” field in Jira. In this label field, Epicflow looks for the budget mark text, “#budget” in our example.
Instead of “tag” you can also use “name” as an identifier for budget tasks. In that case, you have to use the budget mark text in the task name. Similar as with MS-project budget tasks. 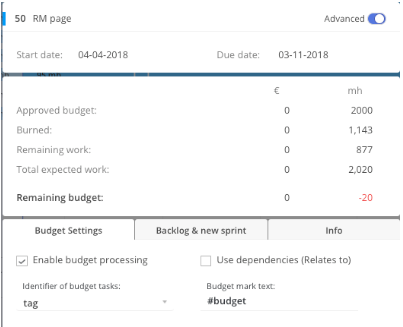 You can also define this setting for all project at the import page: 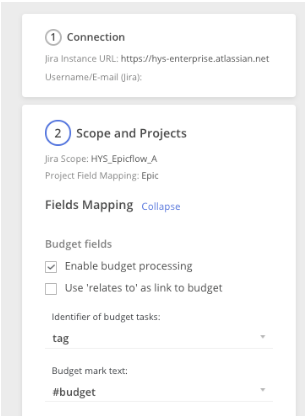 1.2 To mark a task as a budget task one has to define a “#budget” in the label field as displayed in the example below. The group this budget is allocated to is #WebDev.

1.3. You can define budget tasks at different levels:

Similar to MS-project you can add hierarchy to budget tasks. See the MS-project example above.

1.1 In the task list of Epicflow you can filter on the budgets and its related task in the “budget” column. The budget column describes from which budget the task consumes its budget.

When filtering on a specific budget, then all tasks that are directly related to this budget are showed plus the budget task itself. The budget tasks are marked by an orange dot before their task name.

Based on out MS-project budget example, we now filter on the “Budget of Engineering module 01” budget, resulting in our three tasks with 90 mh of work in total and the budget task itself.

Note that for the buffer task (the task with orange dot):

1.3 Hierarchy of buffer tasks. The related buffer of the buffer task itself is “Budget for Engineering”. When filtering in the “Budget” column for all task related to engineering, you can see the hierarchy. If a buffer task is is at the top of the hierarchy (so it can’t consume from any other buffer) then you see [Budget] in the buffer column. See the example below.

Define Budget for a multigroup

If your multi-group is defined in the external system, then you can also define a budget for a multi-group.

In our example, we defined a multigroup “Production” consisting of “Electric” and “Assembly” 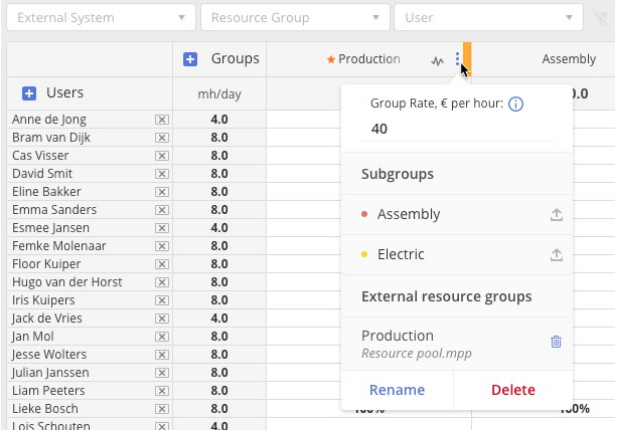 The idea of a budget for a multi-group is that maybe at the start of the project you reserve a total budget for “Production” and in a later stage you will specify who will use which part of the budget.

At the top level, we have besides our “Engineering” budget a budget for “Production”. All task assigned to Assembly or electric or at one of its resource “eat” from this buffer.