This part of the wiki describes processes and functionalities of Epicflow system integration with JIRA.

All topics are set in step by step order to make process of integration intuitive and native.

As a first step JIRA account for integration with Epicflow must be created. User should posses read and write rights to the defined projects for import into Epicflow and additionally rights to operate with API.

A permission can be granted to a group, project role, or issue role that the user is a member of, or granted directly to a user. For additional information about different approaches please refer to official JIRA documentation.

The most common permissions are:

Account creation can be performed with the next set of rights:

Please note, that administrators and  site-admins groups are required for Web-hooks creation or change of such. Epicflow system use them to monitor and process changes from JIRA in real time mode. If such groups are not defined for the user auto-update from JIRA to Epicflow will be done once per hour and you would need to manage the scope of visible projects for the user through a creation of a separate group or usage of previously created.

The difference to the previously described option will be only in the scope of set groups:

Usage of this approach, as well as account rights limitation at JIRA level, is NOT RECOMMENDED, since

In case of necessity to use Epicflow system in configuration when it doesn’t write anything back to JIRA and has only one way synchronization from JIRA to Epicflow, please communicate with Epicflow team to proceed with it. A special mode can be activated for such needs.

Usage of this approach, as well as account rights limitation at JIRA level, is NOT RECOMMENDED, since

API tokens is the must for JIRA authentication usage when configure connection between Epicflow and JIRA system.

For two steps verification  REST API token must be used.

To create an API token 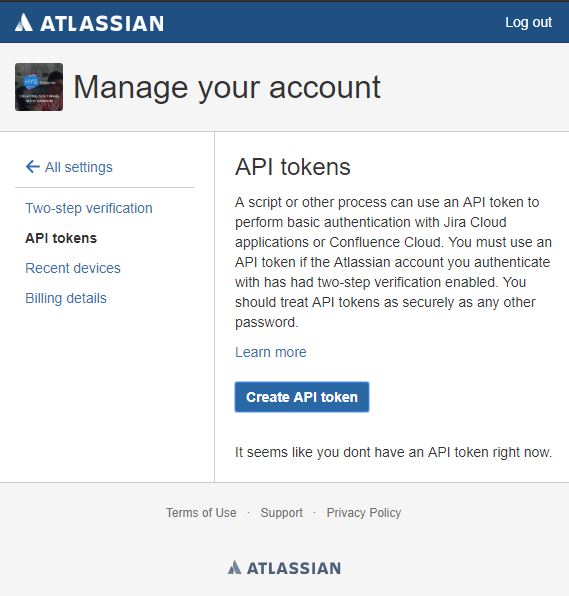 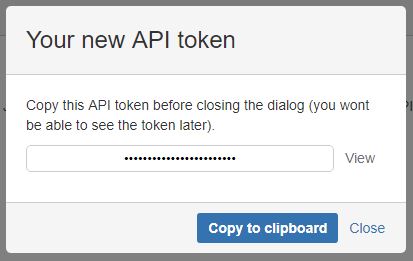 As a step of preparation you would need to create a filter (query) in JIRA to define the scope of projects, epics and tasks defined for the Import itself.

To limit the scope and decrease the load on your system we would recommend to use query similar to the next one:

category = Epicflow AND NOT updatedDate < “YYYY/MM/DD”

where “YYYY/MM/DD” defines period not higher than one year.

Please note that category should be defined and set separately. 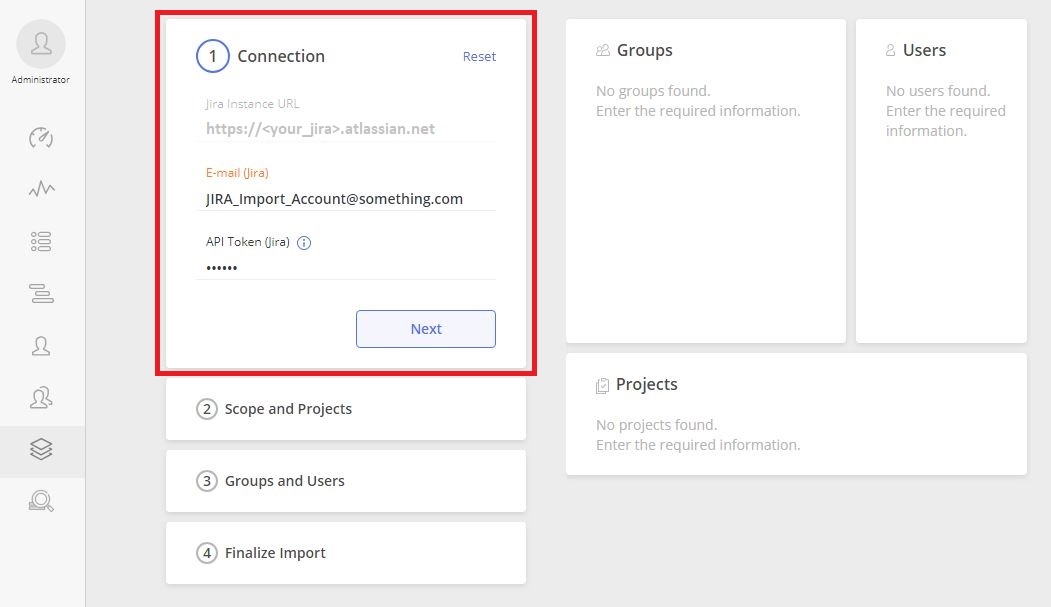 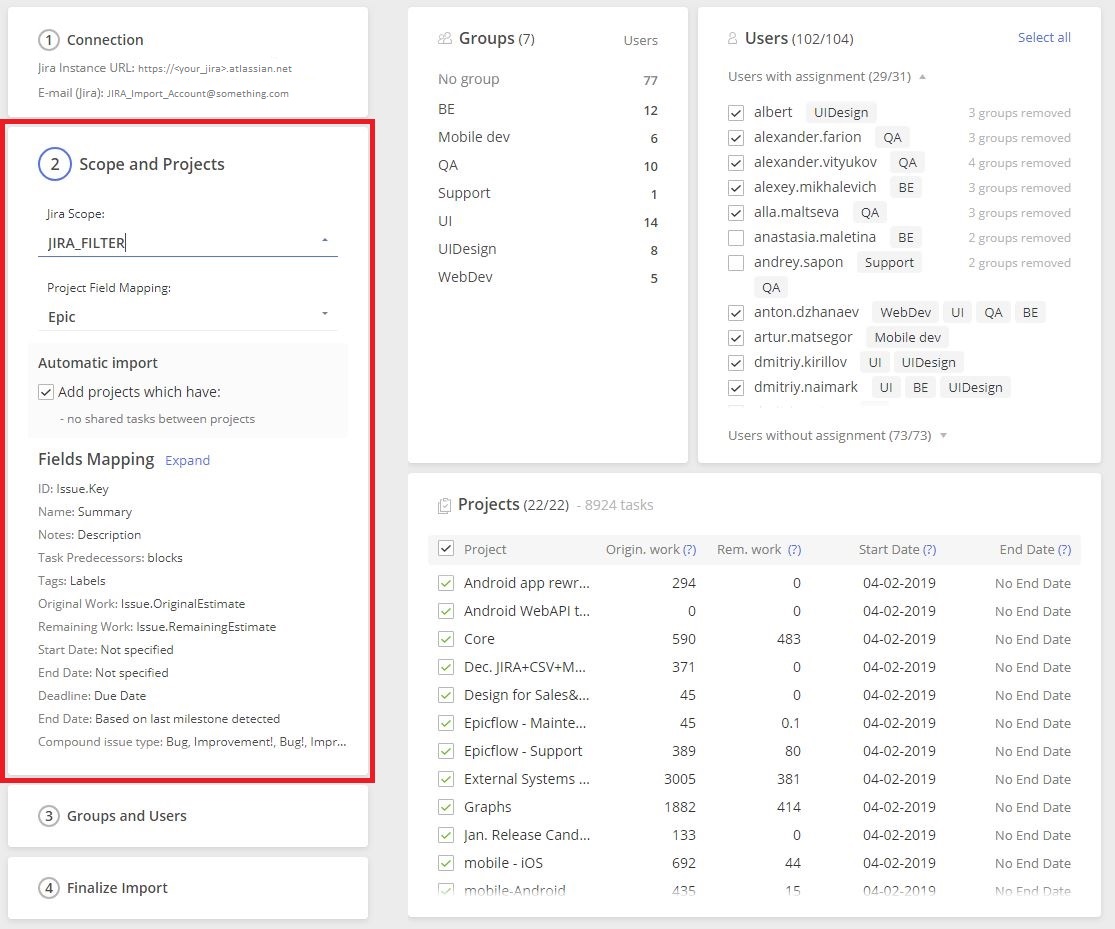 Bellow you’ll find description for all settings of this configuration part.

If in the right bottom frame “Projects” you’ll deselect any Project it wont be imported in to the system despite of any other settings of automatic newly created projects import etc. 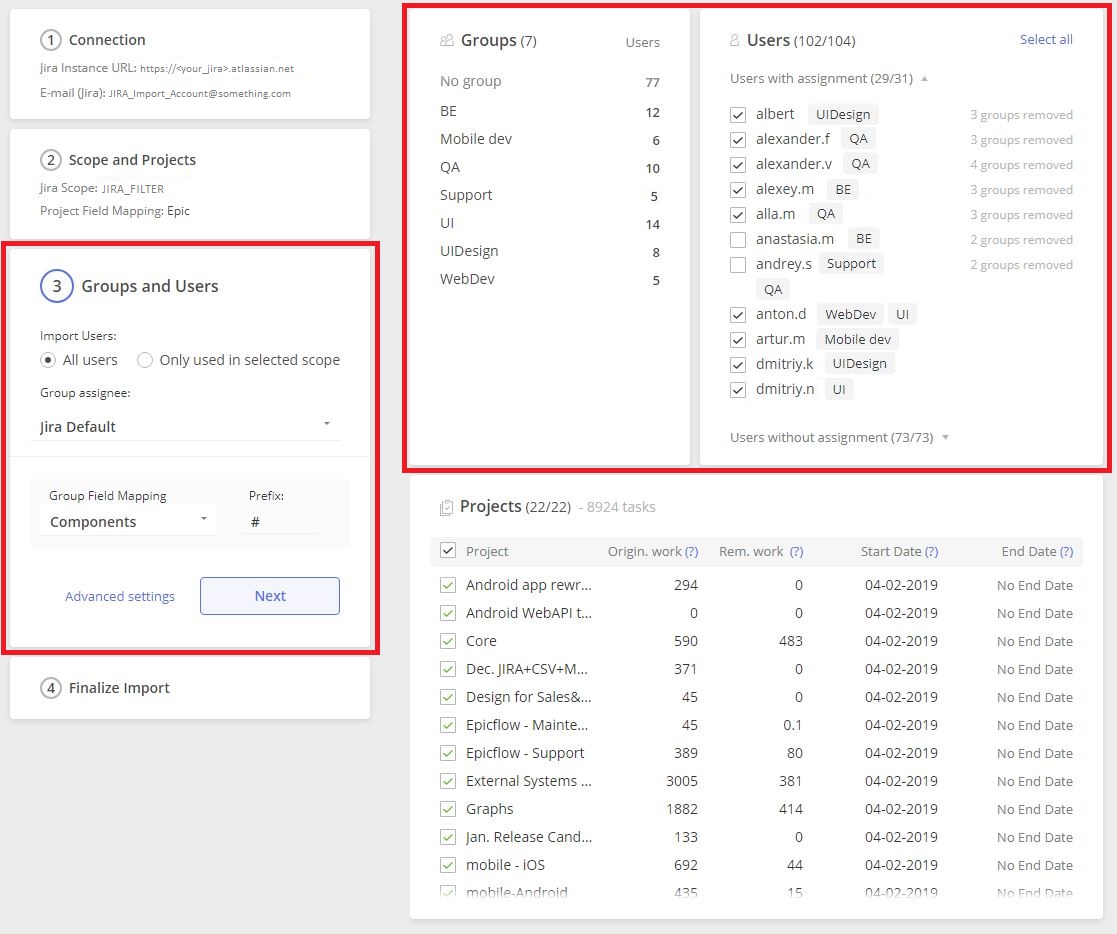 Closer to the top of the screen, you’ll see the list of Groups with the specified number of Users in the loop and a separate field displaying the names of the users and groups they belong to.

You can either remove a group relation or add a new one to a specific user by simple left mouse click.

If your system uses the principle of a web-hook, then the changes made in the Jira environment will be applied immediately at both directions. If not, data synchronization between environments will be performed automatically once per hour.

Having imported your Jira data into the Epicflow system will redirect you to the Pipeline page with all projects imported into the system.

If previously your system was already configured to connect with a different JIRA instances you’ll see a list of such connections as soon as you visit Import page.

To edit any previously created connection you would need to

The system will allow you to specify new rules and add projects you’d like to import OR remove an established connection from the list. At the end you’ll be asked to confirm your actions and in case you approve, all changes will be implemented.

To delete any previously created connection you would need to

To optimize Epicflow output and bring it closer to JIRA you’ll have to complete the following steps: