Task Card Is a feature of Epicflow that grants higher level of convenience for your team in work with one particular task.

It brings all information on the task in structured way to grant you simplest and easiest way in editing and control of all related to the task information and parameters.

This part will contain general description of elements and actions which can be performed at Task Card page. 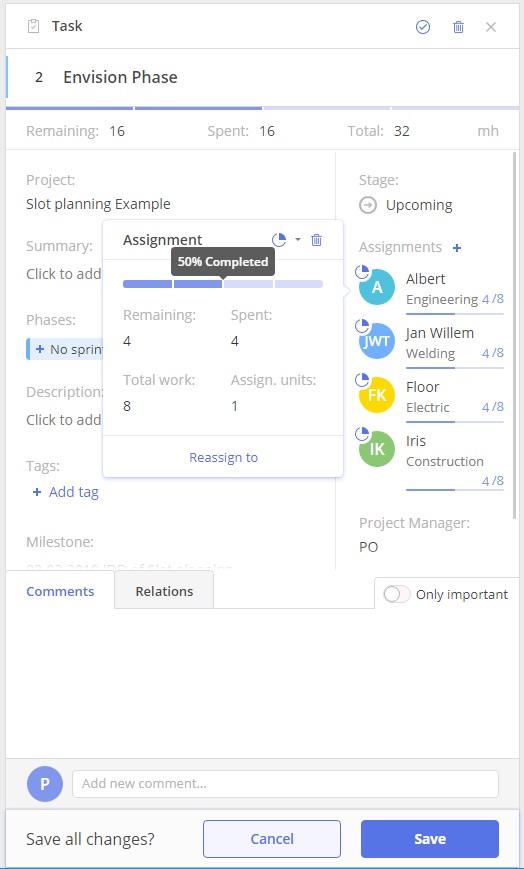 In the left top corner we have Priority of the task. Hovering over your mouse cursor will trigger popup message depiction with the Chain of tasks which contributes to the Task’s priority itself. 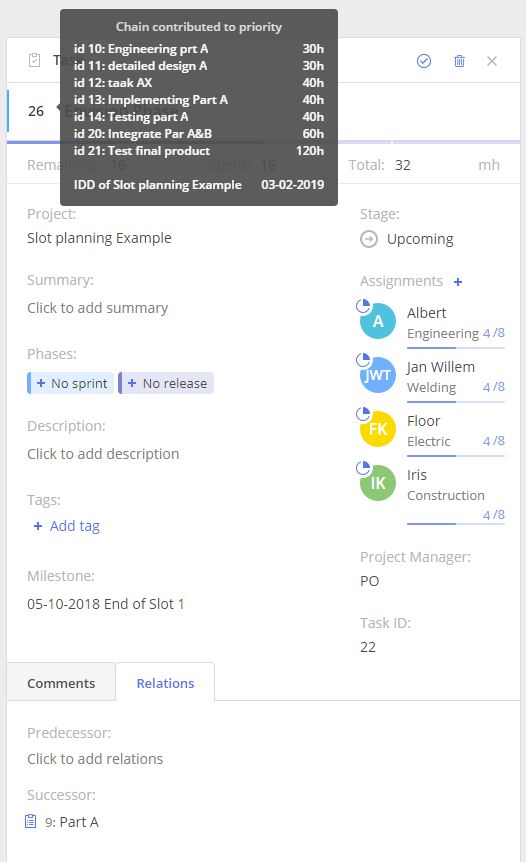 To the right from Task’s Priority we have task name, which you can easily edit and adapt to your needs and “Complete”, “Delete” with “Cross” icons at the right top corner.

Next element is Progress Bar, which indicates Total percent of task’s accomplishment. 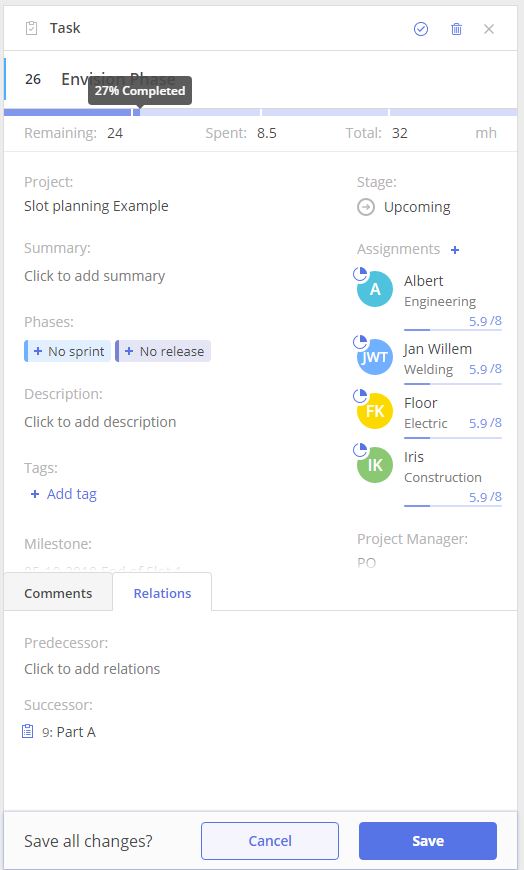 Right bellow it we have Project name, Summary, Phases, Description, Tags and the closest upcoming Milestones for the Chain where we have the task.

Stage – identifies whether the tasks are completed, not estimated, upcoming, not ready to start, or blocked

Task ID – ID of the task

Last but not the least part is Relations tab with information on Predecessors and Successors linked to the task.

For editing values and parameters of the task special set of rights is required to be granted. For additional information please refer to “Administration” chapter.

Status of the task can be measured with next three options:

In case if engineer or PM register progress on task status will be automatically changed to “In progress”.

Also status “Not in progress” is available for selection even after the status was changed to any other.

Task status for a specific assignee can be changed either 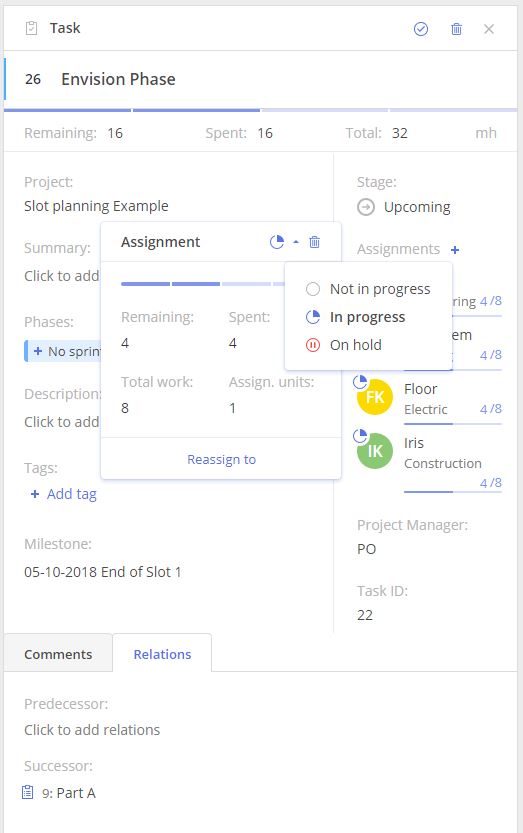 Once all the resources have been added and tasks are specified, the hours can be applied against the them right in Epicflow UI. These need to be added one at a time. 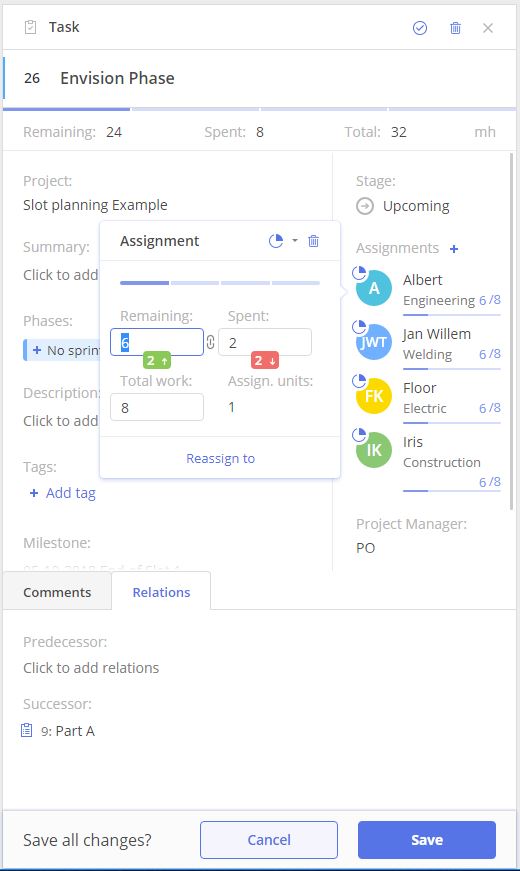 Each task is characterized by estimation of a time which is remaining for its fulfillment, already spent and total sum of such. It’s an essential part of the system and update of those values helps with project’s flow, impediments identification and priorities order.

Remaining is the number of man hours left to accomplish the task. You can modify this number, but please note that it will change the number of Spent man hours or Total.

Spent is the number of man hours that a resource has already burned to accomplish the task. If you increase the number of spent hours, Remaining hours will get reduced accordingly.

Total is the sum of Remaining and Spent man hours.

There’s a special logic behind Remaining, Spent, and Total.

To design or optimize your personal weekly schedule you need to keep focus over the tasks’ prioritization. One of instruments is to set Start or Finish date for the task.

Please note that Project puts constraints on the tasks that force them to start or end on defined date, omitting other the schedule changes.

Progress on task accomplishment is measured in decreasing of Remained hours estimation. To update the Task Progress you would need to change value of Remaining hours.

Also for such purpose you can use Progress bar element itself by dragging point of the progress and setting up required % of task Accomplishment. 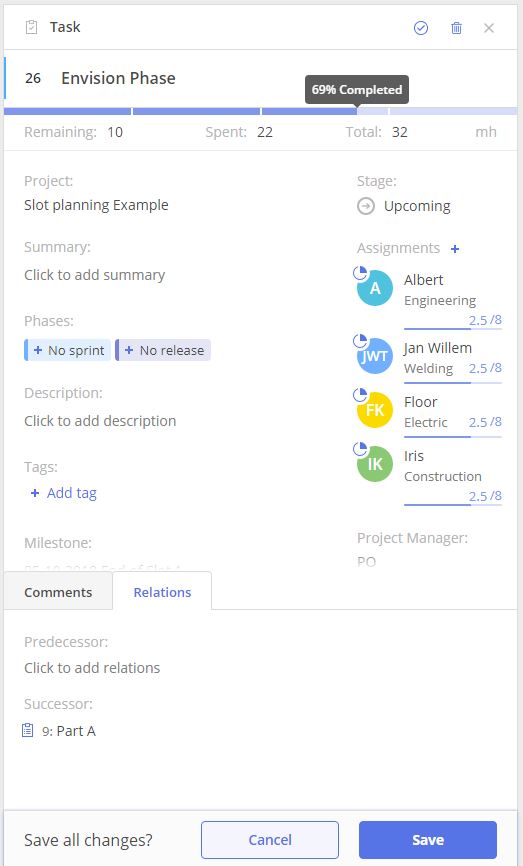 Update can be performed also via synchronization of changes applied directly to CSV or MSP files. As for JIRA integration, Epicflow reads update on hour basis but if you have configured webhooks, update will be done in life mode.

There several approaches to set task for automatic progress indication.

Either you can use UCLT groups or Auto depletions for assignment.

Please refer to those which suits more to your needs.

Once all the Total Remaining hours have been spent, the task will be shown as a completed one. 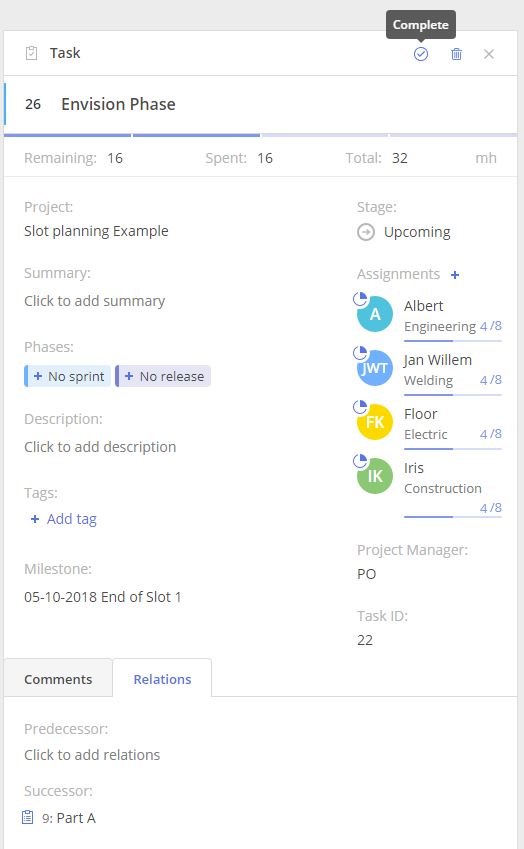 To work with the task completion functionality from the Task Card, do the following actions:

The menu and available options are similar to those in Timesheet.

For more detailed information related to the completion of the task and the distribution of the remaining hours, you can visit the page dedicated to the Timesheet

Task Completion with Two Users Assigned to the Task

If there are two users assigned to the task, apart from other available options, you’ll also see the following information about both users:

You also can use Progress bar element by dragging the pointer of your progress to 100% and setting up task Accomplishment in such way.

For JIRA and CSV integration in case of the task transfer to the “Done” state Epicflow automatically set Remaining hours to 0.

Mentioned mechanism for JIRA and CSV works only with appropriate configuration at import Wizzard page. You also can specify additional states similar to “Done” such as “Won’t Fix” or “Resolved” etc. to have automatic completion process applied to them as well. If you wish to view completed tasks, you need to select “Completed” item in the “Stage” filter 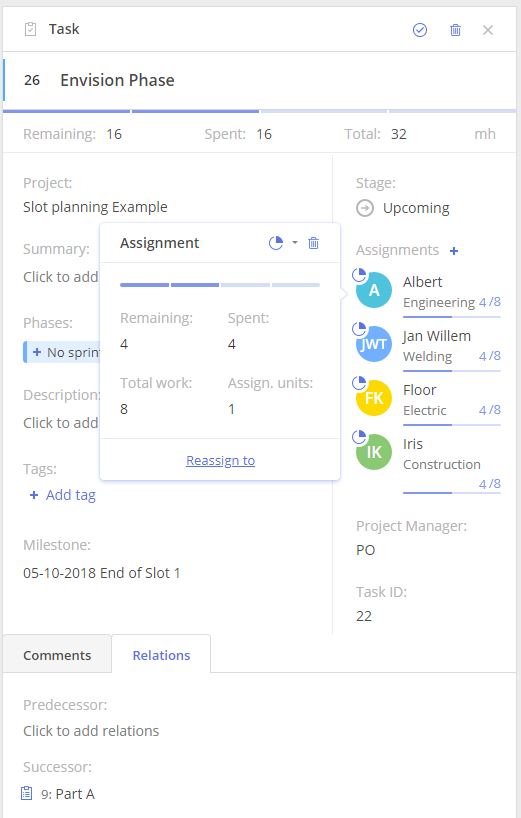 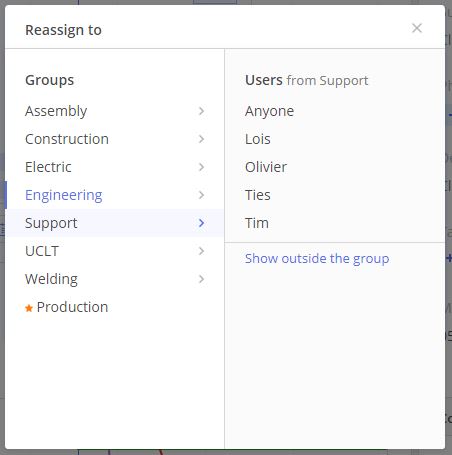 Esc” or left button click anywhere at the page will cancel the change Resource action.

Instead of any particular Resource assignment user can select “anyone” option from the appeared drop-down. It does mean that anybody from the specified Resource Group, who is available, is defined to carry our the task.

If you see two assignments in the tasklist, one of which is marked in the taskcard as deleted, that means you downloaded through the plugin new project data in which the task has changed its resource assignment.

In Resource Allocation advisor you can find Information block which helps to define Competences and remaining capacity of the required Resource at assignment in accordance to the defined criteria of the task itself. 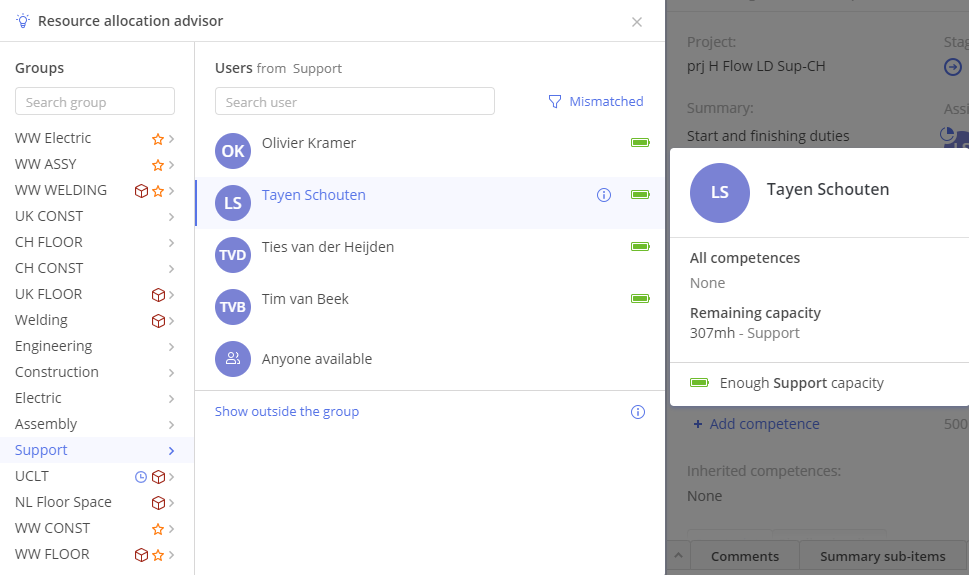 For the second resource adding to the task you will need to: 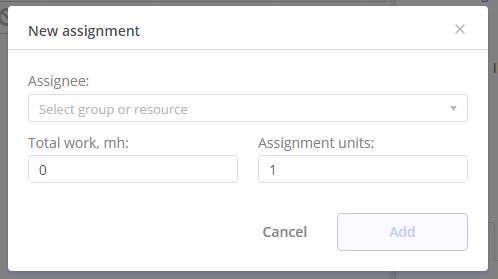 For the case when you would like to shrink resources assigned for the task you need to:

In case if you do have only one assignee in the task you wont be able to delete such. 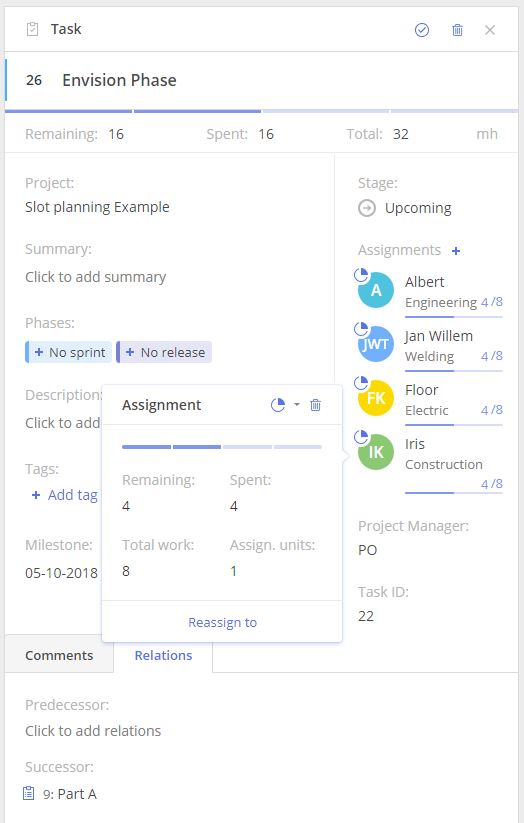 Please note, that in case if Assignee has reported progress, record won’t be deleted. Instead, it will colored in grey and kept without further possibility for editing. 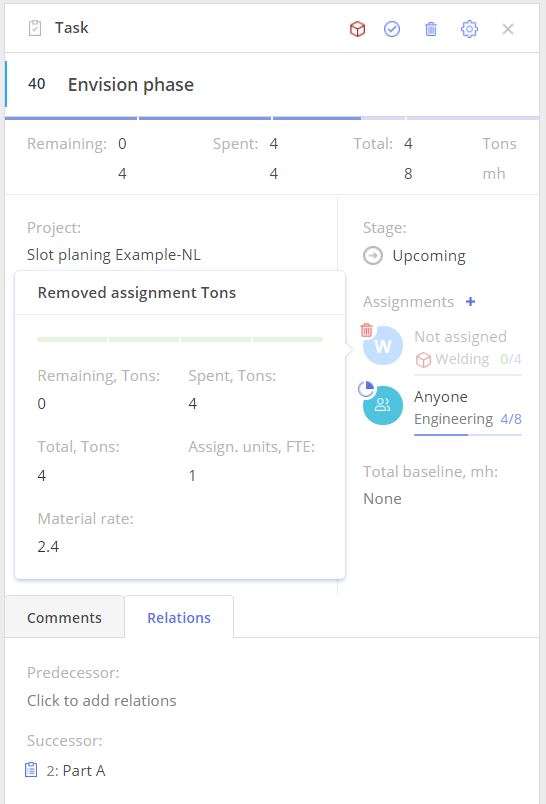 Sometimes situations arise when the resource from another group possesses the necessary skills to perform a task. At the same time, the task is assigned to a specific group but nobody from the group can be used to accomplish the task due to overload or capacity issues. Also reassignment on another group is not appreciated.

The way out of this situation is “cross-group assignment”. It’s mechanism which allows you to assign a resource from the different group than specified for task accomplishment.

Suppose that the resource “Admin” has the skills to perform the task set in front of the “BE” group but he is not a part of that group. Also resources of “BE” group are not in position to work that task and to work it out we are going to involve “Admin” and for that we are going to reassign it on it.

When you go to the Task Card and left click on any Assignment in a new frame will appear where you will see a list of available resources for assignment with the primary assigned group at the top of the list.

We are interested in the resource “Admin”. By selecting it, we see that it is now indicated in the task card. However, the execution group is still considered “BE.”

Note that with such approach the Load created by this task will be evenly distributed among all groups in which the “Admin” resource is allocated and excluded from BE group.

This functionality is developed to plan tasks that are automatically depreciated similar to UCLT tasks. For example, that can be a task for a resource which is hired by a customer on time basis, or when you would like to indicate a task of your resources relocation to the customer side. For such tasks automatic hours reporting can be used.

To switch on this functionality for a separate assignment

Comments is an additional functionality for sharing crucial information directly in Epicflow among all concerned people.

With appropriate set of rights each user can add, remove or edit comment but only personal comments can be removed or edited.

If you would like to add new line during typing shift-enter combination can be used for that. Pressing enter button will add comment to the task itself.

Among all comments user can define an important one by lighting up star icon which appears to the right from the comment on hovering over such.

In a similar way, hovering mouse cursor over the task, you can select option “edit” or “delete” the task itself.

Selecting toggle “Only important ” will hide all not-important comments. 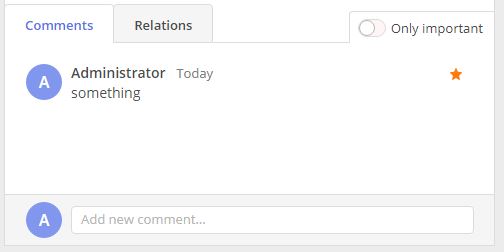 For keeping focus over crucial parameters of the task, user is allowed to select those which are required currently to be displayed in the Task Card. For that icon “Gear” must be used.

Selection of the “Default” option allows to get back to the standard representation whenever it’s required.

Task Card be opened in several different modules of the system, so to simplify navigation Epicflow highlights selected item. Also you can easily navigate to the item on click over the opened Task Card’s header.